In our last review, we took a closer look at the BO Dynamics LT595 AEG – this time, we are going to test another AEG of the French custom gun manufacturer that is BO Manufacture.

BO Manufacture is known for its custom AEG series like the FSB.13 or the AKM.13 and also has a lot of custom manufactured Lonex AEGs in their line-up.

The custom gun that we are reviewing here is called to BO Manufacture Hubert .14 Commando – a limited edition, highly customized G36C AEG with a jaw dropping price tag. The Hubert .14 is named after the French unit “Commando Hubert”.

“Commando Hubert is a combat swimmer unit assigned to the French Navy’s COFUSCO. The unit is tasked with conducting maritime special operations in support of the French Navy and intelligence services, primarily the DGSE”

The Hubert .14 Commando series is limited to 96 pieces worldwide and features a unique paint job with various battered parts like the grip, the bolt cover, the handguard and other areas, where there is a lot of contact and wear.

The Hubert looks like your everyday G36C with a cool paintjob but when considering the enormous price tag it comes with, there has to be more than just the custom paintjob and the battered look to legitimate such a high price. Let’s find out!

The first thing you will notice when picking up the Hubert .14 are the custom markings it comes with. It features the Commando Hubert logo on the left side of the receiver as well as a serial number. Our review model is the number 22 out of 96. The logo and the serial number are laser-cut and look a bit unsharp. This is probably due to the fact that the receiver is made out of polymer and quite hard to laser precisely due to the material melting down too much.

BO again failed with the caliber markings as the marked bore diameter of 5.93mm is smaller than an actual Airsoft BB that has 5.95mm. The inner barrel has 6.03mm, that’s what BO should put onto the receiver or at least the BB diamter of 5.95mm. I think they should get their math right the next time they design and develop another custom AEG. We’ve also seen this kind of fail on the BO LT595 AEG.

The Hubert Commando uses various variants of the H&K G36 rifle and BO Manufacture not only named the G36C after the French commando unit but also tried to recreate their paintjob as good as possible. At least the paintjob that is seen in the photo from the Flashbang Magazine issue underneath. 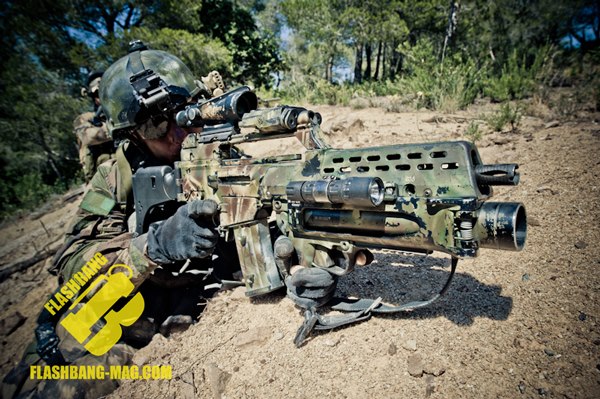 The first thing that stood out was the ambidextrous magazine release, a feature that you don’t see much often on Airsoft G36. In fact, there’s only one company out there, that features this item out of the box – SRC. It seems that BO is using a SRC Gen2 G36C for all the externals and the Hop-Up unit. It was thinking about the body’s manufacturer for quite a while and initially thought, that BO added a real H&K Ambi Magazine Release to the AEG.

The build quality of the SRC body is good, better than all the “Made in China” G36 replicas.There is no wobble, the stock also has no play.

I had one major issue with the quality of the receiver pins though. The handguard pin broke on the first game. The small metal ball inside the pin got suck and the pin wasn’t able to lock itself into the receiver. I then swapped the magwell pin and the handguard pin as the magwell sits tight and doesn’t necessarily need the ball lock inside the pin.

The Hubert .14 comes with a high-cap magazine that has a custom stippling job on it – to cover up the manufacturer’s logo or the H&K logo that is often placed here. BO Manufacture sure has no H&K license at all – I’m not sure if BO even owns the Hubert license for the logo. The stippling job makes no sense as you don’t necessarily put your index finger onto this area when drawing the magazine out of the pouch.

The winding mechanism of the magazine also broke when winding for the first time. BO sent me another one that worked flawlessly trough out the entire test time.

The handguard features three RIS panels on the left and right side and on the bottom. These panels are also detachable and interchangeable with longer rail pieces.

The G36C also features a -14mm barrel thread so yo can attach a variety of suppressors and flashhiders if you wish. A feature not every Airsoft G36C has out of the box.

I changed the Mini Tamiya connectors and soldered on my beloved XT-60 connector. The gearbox also features silver wiring.

Sadly, BO didn’t change the stock Hop-Up. The Hubert .14 still features the standard, cast-iron SRC Hop-Up unit that is downright crap. It’s unprecise, has a lot of play and doen’t really hold the barrel in place.  The gun’s already using a lot of Lonex parts so why not drop in the Lonex G36 Hop-Up unit? For such an expensive custom AEG I expect the Hop-Up to be better than this.

The barrel is a Lonex 6.03 steel precision barrel. I really like those barrels, they are very well made, stright and feel solid. The coating is also sturdy.

The HU rubber is stated to be a 50° type. I had a lot of problems with the rubber. In the beginning, it took a few high-caps to break the rubber in and even after a few games, I had a lot of stray rounds. The range is short and the I already dialed the Hop-Up nearly all the way in. My LCT SR-3 even outperformed the G36C with an even shorter barrel.

Ok, the failed markings and the Hop-Up unit and rubber are a bit of a downer but now comes the one thing that makes up for all the guns’ flaws:

I have to admit, that I am a HUGH fan of this certain gearbox. It runs like a swiss clock.

The gearbox and all the internals are made by Lonex and are of very, very high quality. I know, I say this a lot but this is certainly one of the best gearboxes I’ve touched in a while. The shell features a small BO logo on the right half.

The quality of all the parts is perfect, the shimming is very good, the gearbox sounds absolutely flawless.

I’m not 100 percent sure but I think the gear set is a high-speed type. They are made out of steel and should last a long time.

The motor has no markings or a label at all. The magnets are quite strong and I think it’s the same motor as used in the LT595 AEG series. It seems to be a mixture of torque and speed.

The RoE is actually pretty good.

The piston is made out of polycarbonate and features a steel insert and a ventilated metal piston head with a dampener on top.

The rest of the internals consist out of an airseal nozzle (which is not shown on the photo), a metal spring guide with bearings, a polycarbonate tappet plate, a steel cylinder and an aluminum cylinder head.

By using a 3s LiPo, the Hubert .14 runs like a machine gun. The 3s battery and the high speed gear set deliver around 22 rounds per second which translate to 1320 rounds per minute. Chrono readings were around 360 FPS.

The range and the accuracy were not that great thanks to the stock Hop-Up unit and the soft rubber. There’s a lot of room for improvement here.

Trigger response and rate of fire combined with the lower FPS and the compact size make the Hubert .14 a perfect gun for CQB environments. For outdoor use, the Hubert clearly lacks range and accuracy.

To be honest, this time it is quite hard not to be too negative with my final words.

BO did a good job building a custom G36C that looks cool and performs quite well – BUT, in my opinion, it’s not worth the price.

Oh, did I mention the retail price yet? No? Better take a seat. This thing costs 750 Euro.

Seven hundred and fifty Euros. For a 180€ AEG, a 160€ Gearbox, a 25€ barrel and 30€ spray paint (retail prices!). The thing that makes the guns so expensive is its limited availability and the man/women that paints it and stipples the magazine.

The quality and everything is good, the gearbox is a treat, the internals work well – the only downer, again, is the Hop-Up.

Although, for around 400€, you can easily build your own custom G36C and paint it, which makes it a totally unique piece of gear that no one else owns.

A paintjob like this can be done on one Saturday afternoon with three cans of spray color and some grass. The battered areas can be achieved by using acetone and a cloth which removes parts of the paint.

However, if you have the money to spend and don’t want to build a custom rifle from the bottom up and paint it, the Hubert .14 is for you.

Special thanks to BO Manufacture for letting us test the Hubert .14 Commando.